The number 14 is used by white supremacists as a shorthand reference to the so-called "14 Words," which is the most popular white supremacist slogan in the world:  "We must secure the existence of our people and a future for white children."  The slogan was coined by David Lane, a member of the white supremacist terrorist group known as The Order (Lane died in prison in 2007).  The numeric symbol 14 is used even in those countries where the translated version of the slogan comes to fewer or greater than 14 actual words.

Because of its symbolic significance, white supremacist groups use the number widely, either by itself or in conjunction with other numeric symbols, especially 88 (which stands for "Heil Hitler").  Thus white supremacists may incorporate the number 14 into the names of groups or publications, into screen names or e-mail addresses, or virtually anywhere else. 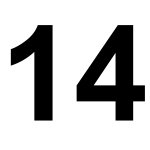