Antisemitism in the Abortion Debate 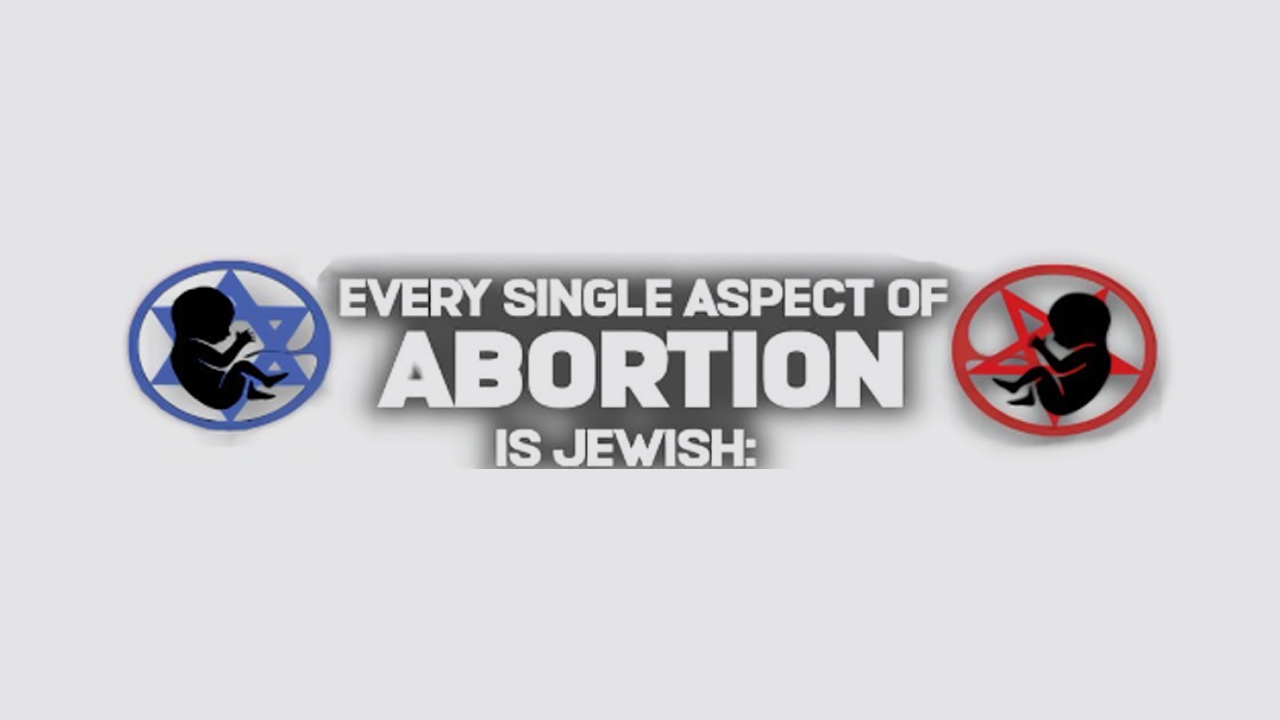 The U.S. Supreme Court overturned Roe v. Wade on June 24, 2022, denying Americans’ constitutional right to abortion. Immediately, antisemites and extremists saw the decision as an opportunity to attack abortion rights and to link their hatred of abortion to their antisemitism. Antisemites took to online platforms, some pushing age-old antisemitic tropes of Jewish control and conspiracy, while others demonized Judaism as a baby-killing religion.

This piece explores the phenomenon of antisemites connecting Judaism with abortion and shows how this hate has evolved and endured through the years.

Jews have been the targets of some anti-abortion activists for years, in part because the American Jewish community is viewed as having a monolithic and permissive attitude toward abortion. Certainly, large segments of the Jewish community in the U.S. support abortion rights, and rabbinic texts state that life doesn't necessarily begin at conception and that an emphasis should be placed on saving the life of the mother. This broad Jewish support for abortion rights has resulted in a range of antisemitic conspiracies.

A central conspiracy theory is the claim that biblical Jews sacrificed their children to Moloch – a Canaanite deity associated with child sacrifice in the Old Testament – and therefore, modern Judaism promotes baby killing (Note: According to religious texts, Jews were, in fact, forbidden from worshipping Moloch). In yet another theory, antisemites have falsely asserted that Margaret Sanger, the founder of Planned Parenthood, was Jewish. The conspiracies surrounding Jews and abortion do not end there.

Abortion has been a fraught issue in the U.S. for years, but the debate became especially heated starting in the 1960s. ADL researchers have documented instances of abortion clinics being targeted in antisemitic incidents as early as 1989, when Boston-area abortion clinics began receiving virulently antisemitic postcards accusing Jews of being “baby killers” and calling for Jews to be killed. One read, “Lynch the lousy Jew aborting doctors! Pray for another Hitler!” Another called for war to “eliminate the American Jew.”

Also in 1989, protesters staged an anti-abortion rally outside a synagogue in Albuquerque, New Mexico, on Yom Kippur, the holiest day of the year in the Jewish religion. They reportedly targeted the synagogue because the rabbi had testified at the trial of individuals charged with blockading a local abortion clinic. One of the protesters told a reporter for the Albuquerque Tribune that Jews “don’t believe that other people killed in the world are as important as their people being killed.”

In October 1990, a Planned Parenthood in Pueblo, Colorado received in the mail an antisemitic diatribe against Jewish power and financial control over the media and the U.S. government. The letter was sent, the writer added, “in the hopes it will cause you some grief for the untold millions of babies you have caused to be aborted.”

Fast forwarding to 2008: Notorious antisemite and Holocaust denier Michael A. Hoffman published a book with antisemitic tropes about Jews and the abortion movement.  His book, “Judaism Discovered: From Its Own Texts,” features a chapter called “Judaism’s ‘Family Values’ – Abortion,” in which Hoffman claims that “abortion for trivial reasons has been the norm in Judaism” and that Roe v. Wade was an expression of this. Similarly, E. Michael Jones, one of the most virulently antisemitic voices heard in the abortion discussion, also published his antisemitic text, “The Jewish Revolutionary Spirit,” in 2008, with a chapter titled “Jews & Abortion.” In it, he claims the “Jewish revolutionary movement” that served as “the vanguard of the abortion movement” was fighting against Christianity and the Catholic Church and was “un-American.”

While the old guard of antisemites press on with their tropes of Judaism as a baby-killing religion and Jewish control of the U.S. government vis-a-vis abortion policies, a younger generation of antisemites has pushed the same narratives – supplemented with threats of violence.

E. Michael Jones continues to share his antisemitic views on abortion with his online following. In the wake of the leaked SCOTUS draft opinion in May 2022, Jones accused Jews of “cultural terrorism” in one video stream shared on his BitChute channel and in another posited that Jews “get away with” “imposing their religion on the entire country” due to “Jewish privilege.” He called on his followers to “rectify this,” saying: “This is our last chance to do this.”

TruNews, a fundamentalist Christian streaming news and opinion platform that has increasingly featured antisemitic and anti-Zionist content, has also pushed antisemitic abortion rhetoric over the last few years. In January 2019, TruNews featured a two-part segment titled, “Roe V. Wade: TruNews Looks at Jewish Contribution to Legalized Abortion.” The series opened with the statement, “In memorial to the 61 million babies killed by abortionists in America, TruNews will highlight the contribution of American Jews to legalize abortion and to keep it as the law of the land.”

Echoing E. Michael Jones’ assertions of Jewish control over American policies, the first TruNews episode referred to “murdering babies” as “Jewish theology” and explained that the United States is now ruled by Jewish theology, which is a mechanism of mind control. In the second episode, TruNews founder Rick Wiles said, “The real Jewish holocaust, however, is abortion...10 times as many American boys and girls have died in Jewish controlled baby slaughterhouses called Planned Parenthood. Yes, abortion is America's true Jewish holocaust.”

Andrew Anglin, the white supremacist founder of the neo-Nazi website Daily Stormer, has also accused Jews of controlling the abortion movement. In a May 2021 article in the Unz Review, Anglin wrote, “At the same time that we blessed Israel, we also endorsed homosexualism, feminism/abortion, mass immigration and race-mixing, and someone could argue that this is why we are doomed...it was the Jews behind all of these corrosive agendas.”

The link between antisemitism and anti-abortion activity was on full display when an antisemite with 20,400 BitChute followers posted an antisemitic rant on June 21, 2022, calling for Jews to be hunted down and executed for their stance on abortion. He proclaimed, “They want the babies. That's fucking demonic diabolical shit...There was Jewish involvement in every corner...They need to be hunted down and tried in the town square, executed in the town square and left there to rot as a reminder to their cohorts.”

Similar online antisemitic posts have provided fodder for physical violence. In November 2020, Joseph Angel Alvarez allegedly attacked and killed attorney Georgette Kaufmann in El Paso, Texas. According to police, Alvarez, who also wounded Kaufmann’s husband, claimed he was "executing and exterminating the pro-choice Jewish Satan worshippers." In his e-mail manifesto, Alvarez referred to alleged Satanic rituals at a park near the couple’s house and demanded that people "stop all murder of babies."

While some antisemites discussed the Supreme Court ruling overturning Roe in the context of long-standing antisemitic conspiracies, others celebrated what they considered to be a step toward overturning Jewish power and control in U.S. government.

Since the June 24th ruling, E. Michael Jones has continued to push narratives of Jewish control of abortion and claims that Judaism worships child sacrifice. In one Gab post from June 25, 2022, Jones wrote “the ‘moral failure’ lies with the Jews who have imposed their Moloch worshipping religion of child sacrifice on us for 50 years. Thank God this tyranny is now over.” On the same day, in an article published on the antisemitic site The Unz Review, Jones wrote that Roe v. Wade was “a Jewish fantasy concocted by...a bunch of crazy Jews from New York which got imposed upon the United States of America by raw judicial power.” He added, “millions of children died because of this Jewish fantasy.” 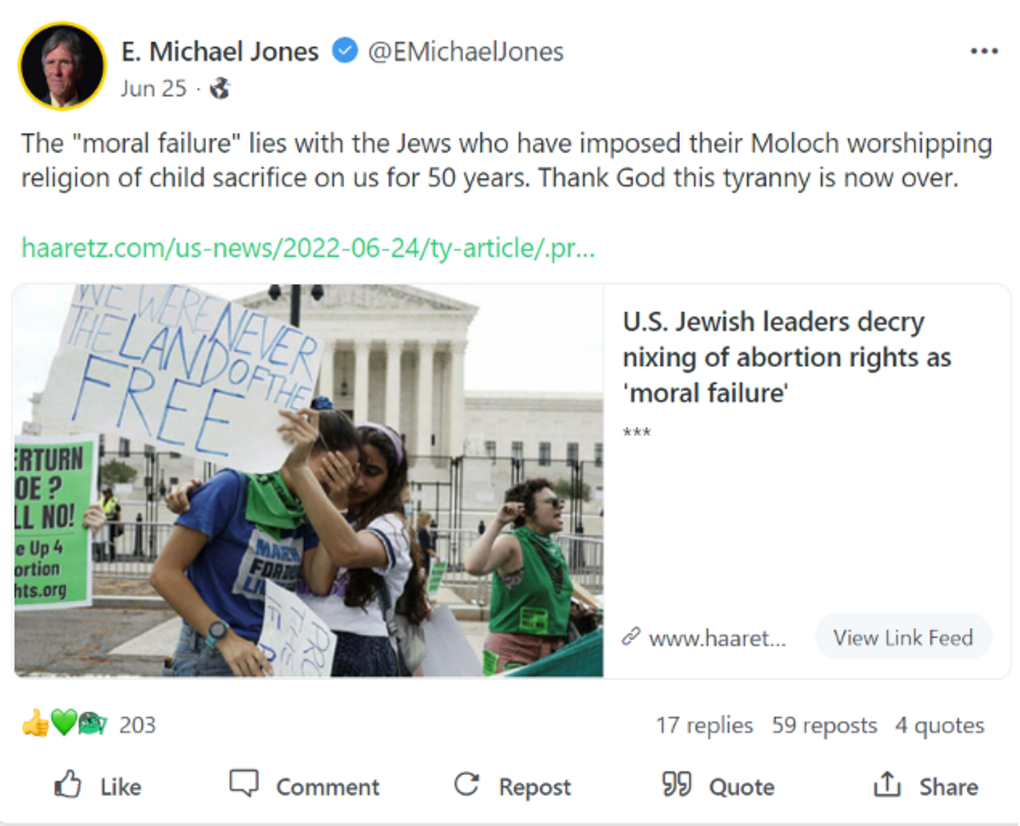 White supremacist Nick Fuentes also shared his antisemitic musings in response to the June ruling, falsely claiming that the Supreme Court decision was the result of three Jews versus six Christians.  Sonia Sotomayor, who voted with the minority, is not Jewish. He went on: “If Ruth Bader Ginsburg, a Jewish woman, didn’t die last year, so that Amy Coney Barrett, a Catholic woman, could be appointed to the bench, we would still have Roe versus Wade...You tell me that it doesn’t matter that you have a lot of these Jewish people in government…”