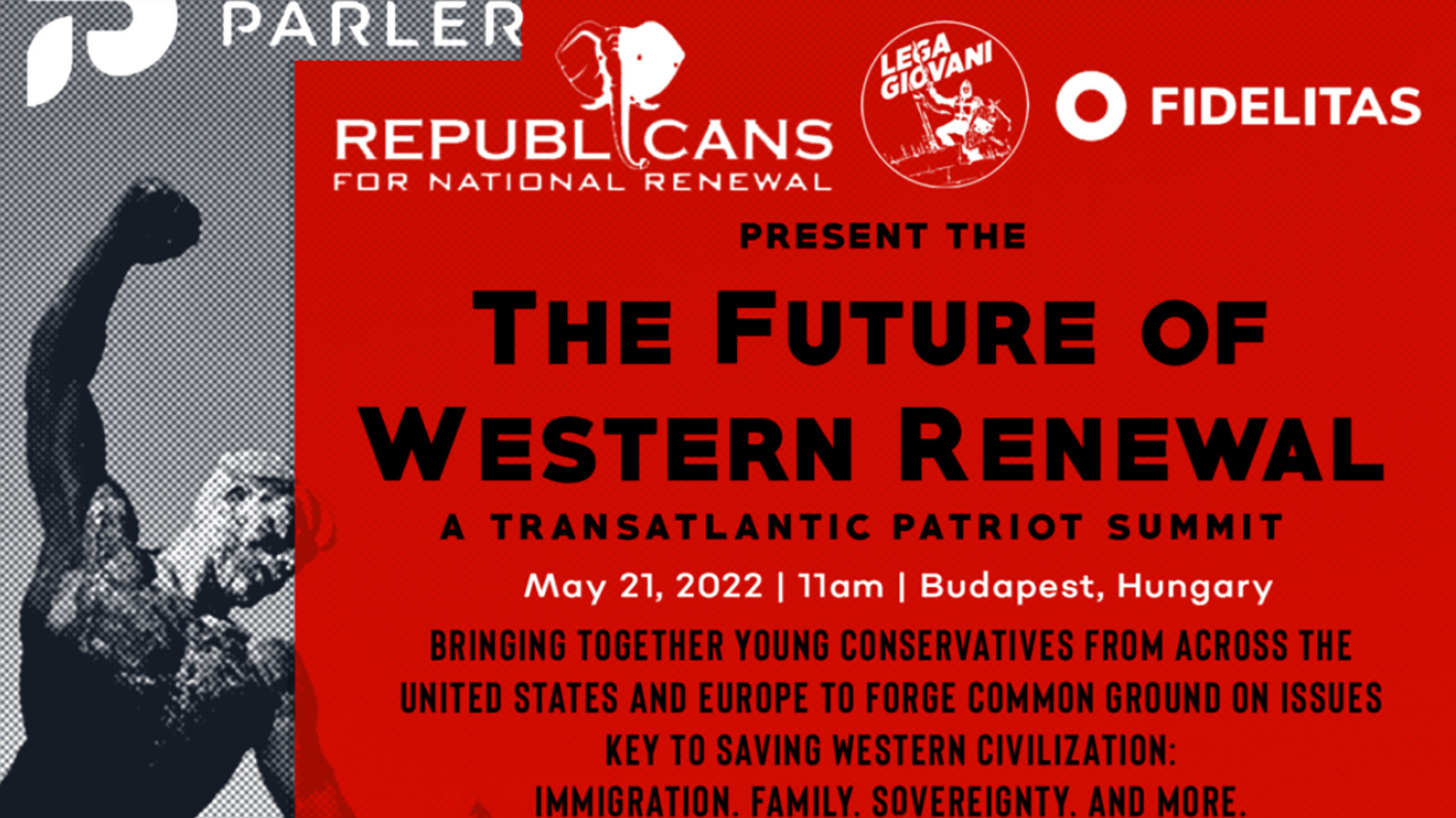 In May 2022, young American right-wing activists attended the CPAC Hungary conference and held their own meeting with youth leaders of xenophobic and ethno-nationalist European political parties. The gathering, “The Future of Western Renewal: A Transatlantic Patriot Summit,” was a veiled reference to “Western Civilization,” a term often used by groups that advocate preserving the white European social, political and cultural “character” of nations, and reject and demonize immigration, multiculturalism and, often, minority populations in their countries.

This gathering, along with the CPAC Hungary event, demonstrates the interconnectedness of American and European far-right thinking, and highlights the xenophobic, nationalistic rhetoric that is being promoted – and applauded – on both sides of the Atlantic. Some of the young American attendees also have ties to right-wing extremists.

This is the second meeting between these European parties and young American conservatives associated with two groups, Young Republicans and Republicans for National Renewal (RNR), a group formed in 2020 by young conservative activists. They met previously at a virtual conference in August 2021, titled “Transatlantic Patriot Summit.” In addition to the parties already mentioned, the 2021 meeting included right-wing populist parties such as Poland’s Law and Justice Party, Latvia’s National Alliance and the Serbian People’s Party.

Some of these parties belong to the Identity and Democracy group, composed of nationalist, right-wing populist and Eurosceptic parties, in the European Union (including Vlaams Belang, National Rally, Freedom Party of Austria, and Conservative People’s Party of Estonia (EKRE)). The Serbian People’s Party also affiliates with Identity and Democracy.

In addition, members of the National Alliance, part of the Latvian governing coalition, regularly participate in the annual commemoration of “Latvian Legionnaires” who fought in German Waffen SS units against the Soviet army. The same is true of members of the Conservative People’s Party of Estonia, who have regularly participated in commemoration ceremonies for Estonian soldiers who fought in Waffen SS units.

Big League Politics, an American far-right news blog, wrote an exclusive about RNR, in which they mentioned that the group “held a panel with Estonian politician and deputy chairman of the Conservative People’s Party of Estonia Jaak Madison.”
According to the Swedish group, Expo, which monitors extremism in Scandinavia, Madison - who has a background in the youth union Blue Awakening -was exposed after the 2015 Estonian election as the author of a blog post praising Nazi Germany and Hitler's economic policy.

Goals of the “Western Renewal” Summit

In a statement released by the American sponsor of the “Western Renewal” summit, Republicans for National Renewal, and co-signed by leaders of the Young Republicans, one of America’s oldest Republican groups, the Americans and Europeans agreed on four points:

Many of these same goals were promoted at CPAC Hungary, where speakers and attendees embraced Viktor Orban’s policies as a model to follow in the U.S. It is important to note that the participants in the “Western Renewal” summit, like many on the right in the U.S. and Europe, blame George Soros and his foundation for the destruction of their societies.

Moving away from the Republican establishment

Republicans for National Renewal (RNR), which made its debut at the CPAC 2020 conference, says on its website that its priority is to strive “for a new conservatism that combines traditional conservative values with nationalist and populist ideas just as President Trump did during his groundbreaking 2016 presidential bid.”

In an appearance on the “Resistance Library Podcast” in 2021, Mark Ivanyo, the founder of RNR, said that the term “national renewal” meant to “renew the Republican Party from the grassroots up ...and that means moving further from the establishment and more toward pro-Trump America First policies...” Ivanyo added that one of RNR’s goals is to connect the youth wings of national populist parties in Europe with Republican youth groups in the U.S. He singled out Hungary’s Fidesz Party, as he did in an article in the right-wing online publication American Greatness in March 2022. Ivanyo said that he had been in contact with Katalin Novak, the current President of Hungary, and had also hosted an interview between far-right conspiracy theorist and reporter Jack Posobiec and Péter Szijjártó, Hungary’s Foreign Minister. According to Expo, Ivanyo also met in Hungary with the right-wing Swedish Democrats, which is trying to build ties and raise money in the U.S.

RNR has endorsed numerous far-right candidates for past and upcoming elections in the U.S., including those who hold extreme views on immigration and have ties to white supremacists. The latter group includes Rep. Paul Gosar (R-AZ); Rep. Marjorie Taylor Greene (R-GA); Wendy Rogers, an antisemitic state senator from Arizona; Laura Loomer, who is running for a Congressional seat in Florida; and former Iowa representative Steve King. All of these politicians have participated as speakers and/or attendees at conferences held by the America First PAC, run by white supremacist Nick Fuentes.|

Ties to white supremacists and other extremists

One leader of RNR has more direct ties to white supremacists. As reported by The Daily Beast in November 2021, Shane Trejo, the Grassroots Director of RNR and a GOP Chairman in Michigan, formerly hosted a neo-Nazi podcast “Blood, Soil, and Liberty” with Alex Witoslawski , a member of the now-defunct white supremacist group Identity Evropa. Trejo is also a writer for Big League Politics. In August 2019, he wrote an article for the site blasting YouTube for removing a channel associated with James Allsup, who also was a member of Identity Evropa, and the racist website VDare.

In addition, Wax is Chairman of the New York Republican Liberty Caucus and an Ambassador for the right-wing student group Turning Point USA. He has written for numerous conservative publications, including American Thinker, American Greatness, and The Daily Caller. The Forward reported that in July 2020, Wax appeared on a podcast run by the racist, anti-immigrant site VDare, where he was interviewed by John Derbyshire, a writer fired from the National Review in 2012 for making racist statements. Wax also tweeted in June 2020, “Enoch Powell was right.” Powell was a racist, anti-immigrant British politician, famous for a speech that talked about halting immigration to Great Britain.

According to the “Angry White Men” blog, Wax invited British racist Katie Hopkins, known for her virulent anti-immigrant views, as the first guest on his podcast, “NYYRC Live” in May 2020. Wax was also one of the organizers of a June 2020 rally in New York City to protest the removal of the Teddy Roosevelt statue in front of the Museum of Natural History due to the racism and colonialism it evoked.

Wax also attended an October 2018 event at the Metropolitan Republican Club that featured Gavin McInnes, the founder of the right-wing extremist group, Proud Boys. After McInnes spoke, a brawl erupted between New York Proud Boys and members of antifa, who had come to protest the event. Several the Proud Boys were arrested for assault and two were later convicted and sent to prison.

After the event took place, Wax wrote an article in American Thinker on October 24, 2018, saying, “Out-of-context quotes from Gavin McInnes are being used to paint him as a right-wing militant leader when he in all actuality he just runs a patriotic fraternal group who like America and beer.” Wax went on to say, that “the organized left means business and are rapidly advancing to destroy you and everything you hold dear. Squabbling amongst ourselves only emboldens this existential threat to our civilization. These forces will have to be stopped if we are able to retain a semblance of our free society moving forward. We all must wake up if we are to have a chance of defeating the left. We are all Proud Boys now.”

Moving the Republican Party Further to the Right

Both Mark Ivanyo and Gavin Wax have been clear about their goals in interviews on podcasts. They want to push the “establishment” Republican Party toward national populism and far-right policies. On the Resistance Library podcast, Ivanyo said that Hungary, which has been widely criticized for democratic backsliding and promoting “illiberal democracy,” is a model for conservatives to follow. Ivanyo tweeted on April 29, 2022, “Such an honor and privilege to receive the recognition and support of Prime Minister Orbán, a true leader who puts the needs of his people and country first and a great global example for conservatives.” In his interview with Derbyshire on the VDare podcast, Wax said that “conservatives need to influence institutions from within, shifting them to the Right.”

As a 501(c)(3) organization, ADL takes no position on or behalf of or in opposition to any candidate for office.