White Supremacists are Supporting the Appeals of Ahmaud Arbery’s Killers

Prominent white supremacists are promoting, discussing and sometimes donating to, a crowdfunding campaign for two of Ahmaud Arbery’s murderers, Gregory and Travis McMichael. Arbery, a Black man, was murdered on February 23, 2020 while jogging in a Georgia neighborhood by Gregory McMichael, his son Travis and William Bryan. In the months since, both McMichaels and Bryan were convicted of hate crime charges and murder. In response, Gregory and Travis McMichael have filed separate appeals for acquittal. To fund the appeal efforts, Gregory McMichael’s wife, Leigh McMichael, started operating a campaign on the Christian-oriented crowdfunding platform GiveSendGo. Thus far, the campaign has raised more than $27,000, and a further analysis of comments left with donations shows that several comments espouse the same hateful rhetoric that prominent white supremacists use to promote the campaign.

This support is representative of a growing trend of white supremacists using crowdfunding to back their efforts and to spread their message.  While extremists have long used crowdfunding, such as in the case of Jacob Goodwin’s legal expenses after Unite the Right, this particular instance demonstrates just how effective crowdfunding can be for white supremacists.

Prominent white supremacists have repeatedly used their websites, blogs and social media presence to promote the McMichael appeal, and some comments left by campaign contributors show that these calls for support have had an impact on the crowdfunding effort. Jared Taylor, a white supremacist who operates the extremist outlet American Renaissance, has written about the McMichael appeal on multiple occasions. He has posted calls for funding on his Gab account, where he has 14,000 followers. One post on Gab garnered more than 700 likes and 350 reposts. Center on Extremism researchers have also identified two comments from contributors on the GiveSendGo campaign that directly attribute their knowledge of the crowdfunding campaign to Jared Taylor or American Renaissance.

Neil Kumar, a former candidate for Arkansas’ 3rd Congressional District who has parroted white supremacist talking points and associates with white supremacists, is another major promoter of the McMichael crowdfunding effort. Kumar made a $1,000 donation to the campaign, and then posted about it on Gab, requesting that his 8,000 followers also donate. This post received more than 740 likes and was reposted 268 times across Gab.

White supremacist, and former political candidate, Neil Kumar posts on Gab encouraging his followers to donate to the McMichael crowdfund. 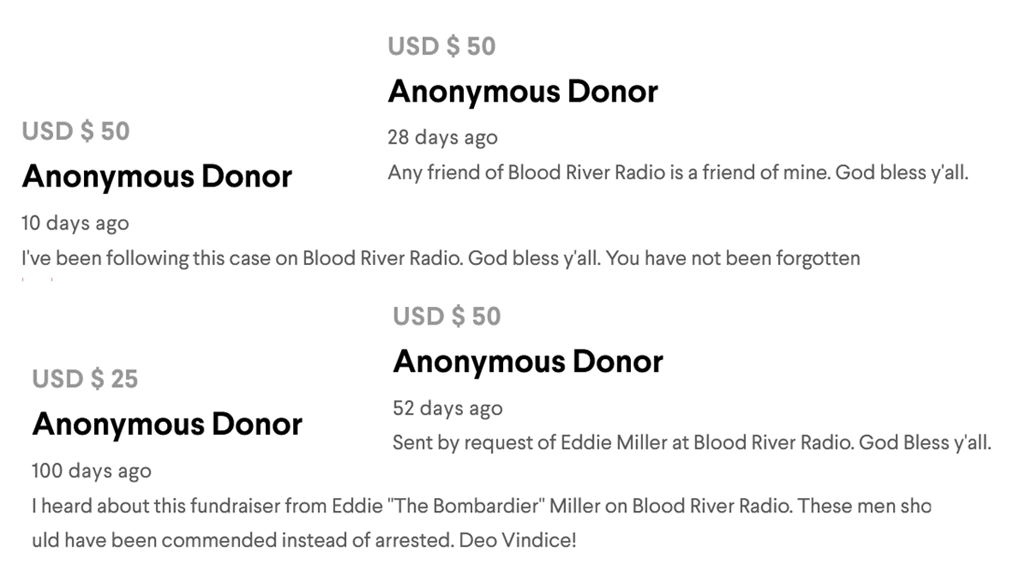 White supremacist John Derbyshire issued calls for financial support of the McMichael appeal to his thousands of Twitter followers.

White Supremacists are Sharing the Campaign

White supremacists online have perpetuated these influencers’ calls for support while offering their own calls to action. For example, on extremist-friendly 4chan, an anonymous user said, “A donation for McMichael is a middle finger to n——,” and then posted a link to the GiveSendGo campaign for the McMichael appeal.

An anonymous user on 4chan’s /pol/ board posts about donating to the McMichael appeal.

On Gab, users who espouse white supremacist rhetoric are also sharing the McMichael’s GiveSendGo campaign. One user, who describes themselves as a “Civil Rights Activist for Whites” and whose account bio espouses the white supremacist 14 words slogan, posted a link to the GiveSendGo campaign on their timeline. Another Gab user who posted about “the culture of criminality in the black community” shared the link as well.

The Gab user profile of a contributor to the McMichael appeal.

On extremist-friendly Telegram, several white supremacist spaces have hosted conversations about the McMichael appeal and have shared links and articles about the GiveSendGo campaign. A search across several extremist spaces on Telegram showed that more than a dozen groups associated with white supremacy and white nationalism perpetuated calls for financial assistance. In one white nationalist chat, a link to an article promoting the McMichael appeal is posted immediately after a post announcing a gathering of the Klan-affiliated group, Aryan Freedom Network. A Telegram chat run by the white supremacist group White Lives Matter posted a link to an American Renaissance article describing the McMichaels as victims and imploring their readers to contribute to the crowdfunding campaign. 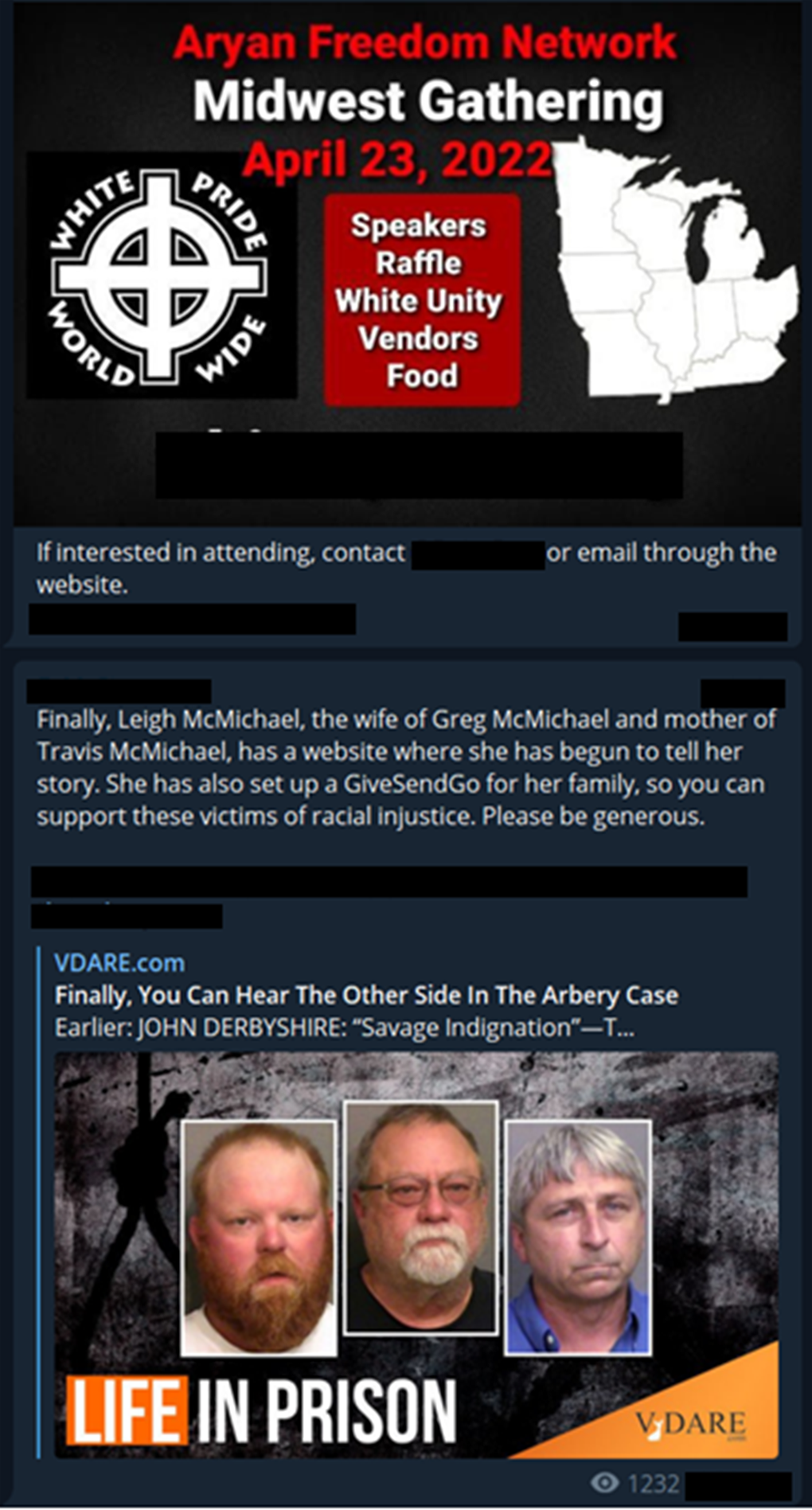 Because of GiveSendGo’s pseudonymity, it is impossible to know exactly how many contributions were made by white supremacists, but comments left by donors can shed light on individuals’ motivations for giving money. An examination of comments left on the crowdfunding campaign found many that espouse white supremacist beliefs like The Great Replacement Theory or invoke racially charged rhetoric. Two notable comments state that the “country is being invaded… it’s the end of white America [sic],” and “America is becoming a reverse apartheid state.” A contributor who donated $20 commented, “I pray that we will beat this black scourge attacking our nation.” An anonymous donor commented, “We’re all sick of the joggers.” The term “jogger” was adopted as a slang, anti-Black racial slur by racist individuals in the wake of Ahmaud Arbery’s murder.  Other comments refer to “blacks” as “thugs” and call the McMichael convictions an attack on the white race. Notably, all the identified comments were only made after Jared Taylor and other white supremacists announced their support for the campaign, and not in the months before, even though it was live.