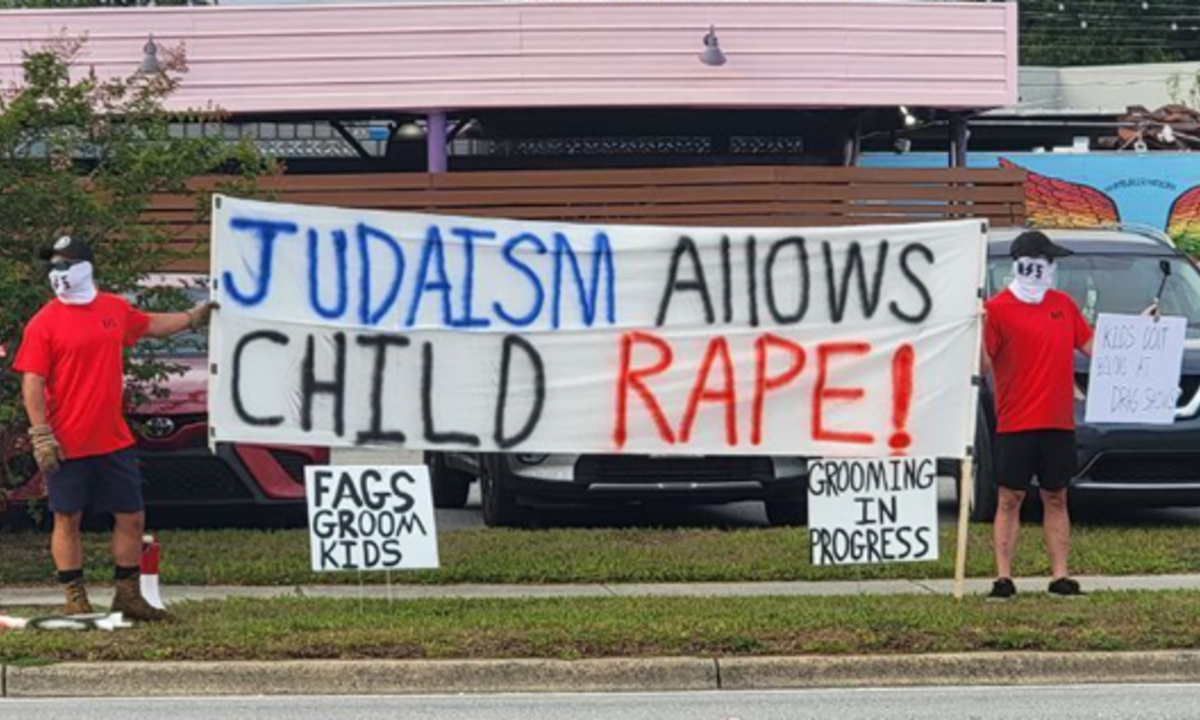 In recent years, extremists and antisemitic conspiracy theorists have capitalized on the spread of dangerous and offensive falsehoods about LGBTQ+ people – including false claims about “grooming” and gender-affirming medical care – using these lies to further their bigoted agendas. Some anti-LGBTQ+ fearmongering simultaneously lifts antisemitic stereotypes and conspiracy theories about the alleged Jewish role in promoting the so-called LGBTQ+ “agenda.”

Adherents believe that Jews hope to prompt the downfall of Christian or Western society by promoting “sexual immorality”, and popularize these “perversions” through control of the media, entertainment, academia and government. White supremacists often weave this narrative into their theories about so-called “white genocide,” and extremist Black nationalists incorporate these beliefs into their claims about population control.

These narratives draw on and reinforce the long history of antisemitic tropes about Jewish sexual “deviance” and immorality. In the Middle Ages, for example, antisemitic “Judensau” images carved on European church façades depicted Jews engaged in sexual acts with pigs. In the 19th and 20th centuries, Jewish men were often characterized as effeminate, while Jewish women were seen as unladylike and sexually aggressive. The Nazis viewed both Jews and LGBTQ+ people as a threat to the regime’s racial, reproductive and military goals.

Today, antisemites continue to stereotype Jewish people as purveyors of so-called sexual perversion, with anti-LGBTQ+ tropes about pedophilia and abuse converging with the age-old antisemitic canard that Jews prey upon non-Jews, especially non-Jewish children. The current confluence of antisemitism and anti-LGBTQ+ hate is perpetuated by extremists and conspiracy theorists from a wide range of ideological backgrounds.

A broad spectrum of extremists regularly accuses Jews of controlling the entertainment industry and promoting a so-called LGBTQ+ “agenda,” and falsely claim that Jewish religious texts condone the rape of young children and other sexually immoral behaviors. Signs and propaganda promoting antisemitic allegations were seen at some of the more than 140 anti-LGBTQ+ protests that targeted drag events in 2022. 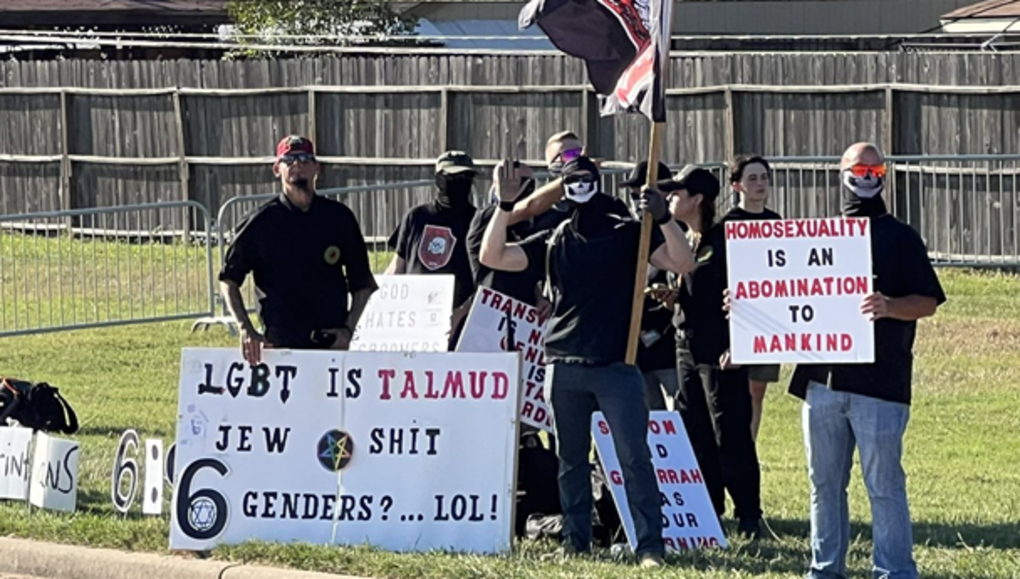 White supremacist protesters outside of a drag bingo event at a church in Katy, TX on September 24, 2022 (source: Twitter)

Extremists made antisemitic and anti-LGBTQ+ claims about The Walt Disney Company in 2022 after it denounced a discriminatory law signed by Florida Gov. Ron DeSantis prohibiting teachers from discussing sexual orientation or gender identity in K-3 classrooms.

Extremist religious groups also make conspiratorial claims about Jews promoting LGBTQ+ rights, which they often refer to as “degenerate” behaviors. During its high-profile picketing activities in the 1990s and early 2000s, the virulently anti-LGBTQ+ and antisemitic Westboro Baptist Church (WBC) claimed that Jews “energize the militant sodomite agenda.” WBC denounced members of a local synagogue in Kansas as “sinful, greedy, Hell-bound, money-grubbing sodomites” who “have dedicated their synagogue to be a gay and lesbian propaganda mill and recruiting depot, soliciting young people to sodomy.”

Arizona-based pastor Steven Anderson of the New Independent Fundamental Baptist (New IFB) movement, a loose network of churches that promote deeply antisemitic and anti-LGBTQ+ beliefs, has decried the modern state of Israel as “an ungodly place” due, in part, to the supposed prevalence of “sodomy and homosexuality.” New IFB-affiliated pastor Grayson Fritts of Tennessee similarly remarked in 2020 that “Israel today is a wicked nation…Just this disgusting, wicked cesspool…It’s full of sodomites and filth…It’s a queer sanctuary.”

The Nation of Islam (NOI), an extremist Black nationalist group, routinely espouses both antisemitism and anti-LGBTQ+ bigotry. Longtime NOI leader Louis Farrakhan has stated that “pedophilia, homosexuality, sex trafficking is the work of Talmudists” and that “it’s the wicked Jews, the false Jews that are promoting lesbianism, homosexuality.” Farrakhan claimed in 2018 that “the Jews were responsible for all of this filth and degenerate behavior that Hollywood is putting out: turning men into women, and women into men.”

Blaming Jews for subverting and replacing “traditional” values and families

The conspiratorial notion that white people are in danger of extinction and that action is needed to “save” the white race is a key motivating factor for white supremacists, who blame Jews for deliberately engineering a so-called “white genocide” to replace the white population with Black and Brown people. The alleged targeted promotion of LGBTQ+ identities and relationships is seen as a key element of Jews’ attempts to reduce reproduction rates among straight, cisgender white people.

A manifesto written by Payton Gendron, the white supremacist perpetrator of a May 2022 mass shooting at a Buffalo supermarket, extensively promoted antisemitism and the Great Replacement theory. Gendron included a meme that named Magnus Hirschfeld, a Jewish physician who was targeted by the Nazis for his pioneering work on the study of gender and sexuality, as well as Jewish individuals affiliated with organizations that support transgender rights, for supposedly “leading the push” to increase “transgenderism.” 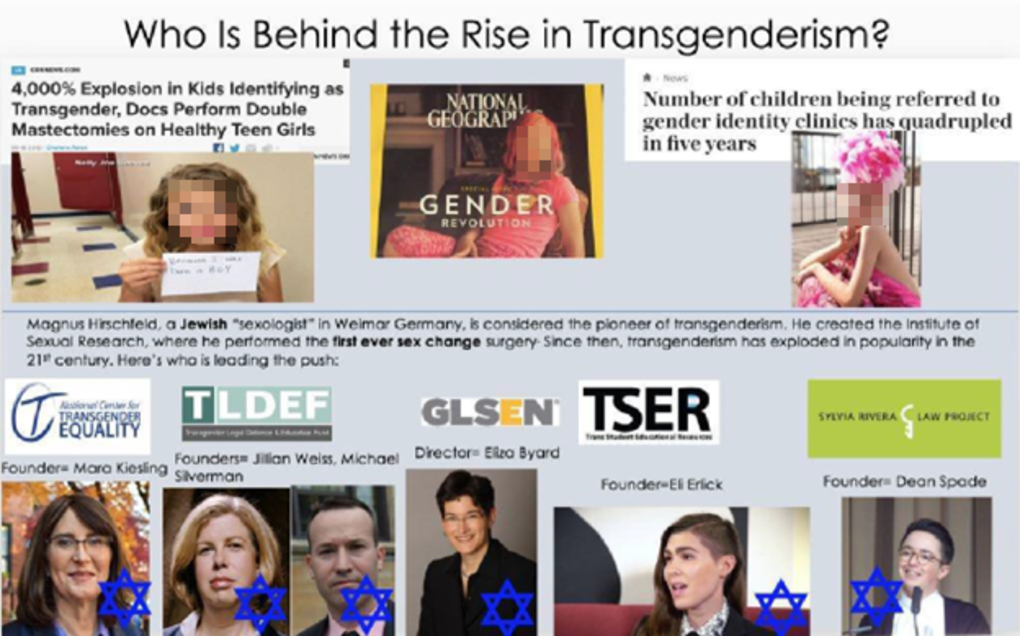 White supremacist John Earnest, the convicted perpetrator of the deadly 2019 shooting at a Poway, CA synagogue, also penned a manifesto that blamed Jews for conducting a “meticulously planned genocide of the European race.” Earnest’s manifesto detailed a series of alleged “crimes” committed by Jews, including “their degenerate and abominable practices of sexual perversion and blood libel.”

Similar messages can also be found in extremist publications, propaganda and social media.

Despite the disparate overarching ideologies of white supremacists and extremist Black nationalists, there are parallels in their conspiratorial claims about supposed Jewish-orchestrated population control efforts. Farrakhan and his followers in the NOI have repeatedly said that homosexuality is “unnatural” for Black people and that it was introduced and promoted by Jews and the government to Black populations via cultural and chemical manipulation.

NOI social media influencer Rizza Islam has stated that “there is no such thing as anyone being born homosexual” and that gay men are the result of “chemicals” which are used to “create and enhance femininity.” NOI Executive Council member Wesley Muhammad coined the “Pot Plot” conspiracy theory, which he defines as “the US government and the Synagogue of Satan’s scheme to use manipulated marijuana along with other drugs to de-masculinize and feminize the Black male of America.”

In 2021, NOI members criticized the BET Awards after the annual broadcast featured a same-sex kiss between singer Lil Nas X and one of his male backup dancers. Rizza Islam wrote in response, “[BET] is owned by VIACOM - Jewish people…It should make more sense now why certain things are being allowed and even ENCOURAGED.” Reflecting on the performance, Wesley Muhammad commented that “the Gay Mafia and the Jewish Mafia are one-and-the-same in the upper echelons…the controllers of Rap.”

In August 2022, prominent right-wing social media accounts circulated anti-transgender misinformation claiming that children’s hospitals were mutilating children by providing gender-affirming healthcare. Despite being debunked, these false allegations quickly gained momentum, including among some antisemites who accused Jews of trying to harm or control children. Antisemitic conspiracy theorist Harry Vox claimed: “Jews are the driving force behind the transgendermania being aggressively promoted to the young in the West. The goal - the breakdown of the family and the supremacy of the Jewish people to replace American hegemony.” 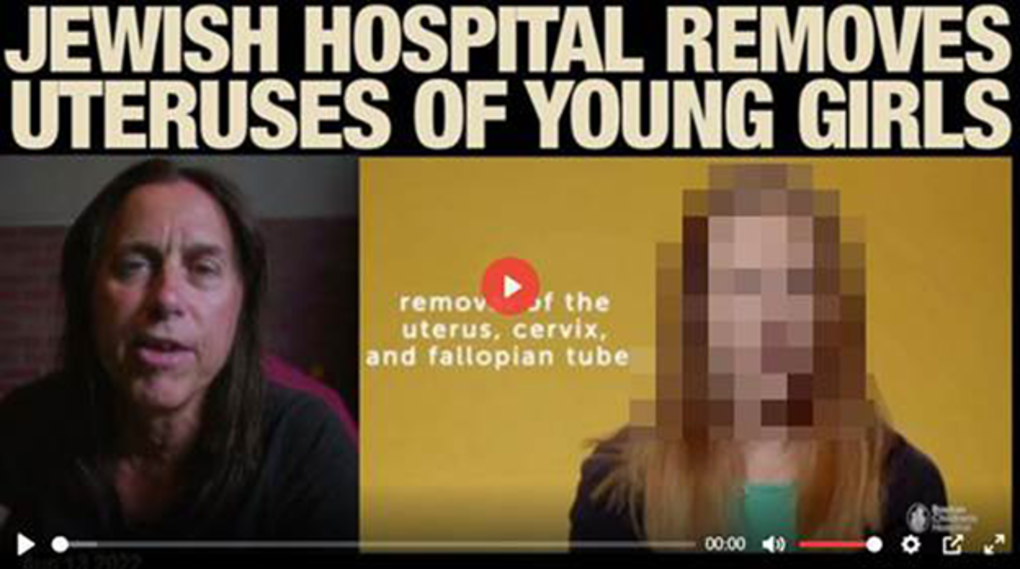 Blaming Jews for funding or driving medical research and advocacy around transgender issues is not a new trend among antisemites and anti-LGBTQ+ bigots. Boston Children’s Hospital was previously targeted with antisemitic, anti-transgender hate more than a decade ago related to the work of Dr. Norman Spack, who founded the hospital’s Gender Management Service Clinic in 2007. On neo-Nazi and white supremacist forums such as Stormfront and Vanguard News Network, users made antisemitic remarks about Dr. Spack, posting comments that included slurs and violent ideation targeting Jews.

In her 2021 book, Trans, The Economist’s Helen Joyce claimed that the transgender “global agenda” is “shaped” by three wealthy individuals, including Soros and Pritzker. Though Joyce did not explicitly highlight their Jewish identity, her statements echo the frequent conspiracy theories which portray Soros as the mastermind behind plots to undermine or destabilize societies. These conspiracy theories serve to mainstream the hateful tropes that are propagated by antisemites and extremists.

Jennifer Bilek, a prominent anti-transgender writer, has also referenced Pritzker and Soros, including in a 2018 article which claimed that “transgenderism” is “manufactured” as part of an effort “to normalize altering human biology” and in a 2022 article in Tablet magazine about the Pritzker family. Bilek’s writings have been shared by antisemites, and she in turn has openly called attention to the Jewish identity of those she blames for the so-called “transgender project” and the broader “transhumanist agenda.” Bilek shared a video in 2021 from antisemitic YouTuber Keith Woods about “Transhumanism and Judaism” and in 2022 commented that the Pritzkers “actually are promoting a religion but it isn’t Judaism - it is the religious cult of Transhumanism.”

During a 2021 segment on TruNews, a fundamentalist Christian streaming platform, antisemitic founder and co-host Rick Wiles criticized the Pritzker family for allegedly “using their wealth to fund the homosexual, transgender mental illness campaign in America.” During the segment, Wiles intentionally deadnamed and misgendered Jennifer Pritzker and claimed that she is “another rich Jew using his [sic] money to turn America into a perverted cesspool,” adding that “the American people are oppressed by Jewish tyrants.”

Antisemitism and anti-LGBTQ+ hate are often intertwined, and it is important to support Jewish and LGBTQ+ communities by combatting both forms of hate. ADL and GLAAD have partnered to strengthen efforts to monitor, expose and disrupt these dangerous trends. Others can get involved by reporting incidents of hate and extremism to law enforcement and the ADL; opposing anti-LGBTQ+ legislation and joining local coalition groups; and educating themselves and others on these issues.